How do you hang your surfboard on the wall with style? Design and function are the key elements to picking the right surfboard wall rack. Surfing is a love of nature, adventure and the big beautiful blue sea. One of the earliest human records show people on surfboards found in early cave paintings in Polynesia from the 12th century that went viral once the Hawaiians discovered this sport that actually become part of their religion on living. Rituals were practiced during the shaping of surfboards. So it makes sense that we who ride the oceans look to respect the surfboards we live with and to incorporate them in our lives.

And that's how we met Don ...who had recently moved to a new house with a collection of boards that he had been surfing with and collecting most of his life. He wanted to know how to install his surfboards in his home. He wanted wood surfboard racks for their natural feel and he wanted them to have a minimal profile. The best surfboard racks that he found were made by Hawaiian Gun Rack and to his delight we offer design and local installation services to mount surfboard wall racks in your home.

Our first task was to decorate a long blank wall at the entrance of his home. Using the Hawaiian Gun Rack vertical surfboard wall rack we installed 3 of his classic surfboards. 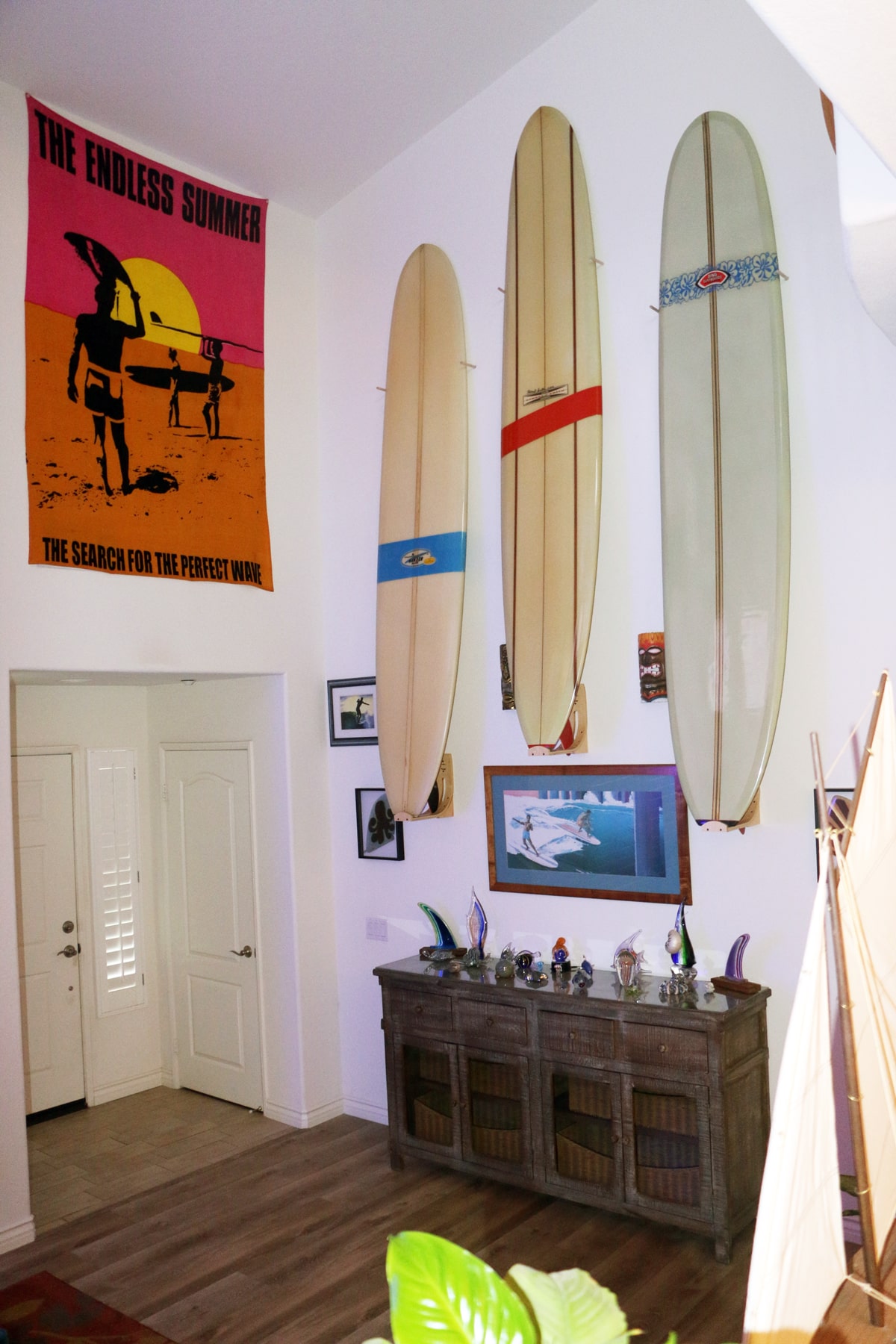 We discovered each of the surfboards had their own ..."spirit" ...and as we proceeded to figure out which surfboard would go where ...it turned out the surfboards ...guided themselves. It was magical  ...I've been installing surfboard racks for special projects for several years and this was the first experience where the surfboards guided us. We tried several times to put certain boards next to each other and only when the right combination prevailed ...it was visually instantaneous that these 3 surfboards belonged next to each other.

The surfboard on the far left is a 1965 Hansen master. The board in the middle is a 1965 Gordon Smith Prototype 3 Stringer red fin shaped by Mike Hynson , the board on the right is a 1966 David Nuuhiwa shaped Bing noserider .

He was so happy how the first wall turned out that I came went back 2 more times to finish the room with the rest of his collection.

When mounting the surfboard racks on the third wall we wanted to make sure the studs would line up so the next 2 surfboards would have visual symmetry and align with each other. The "olo" surfboard rack was designed for classic surfboards with glassed in fins to hang in a horizontal fashion. These boards are heavier than most modern day short boards so it required a stronger surfboard rack that would hold the weight and still offer visual sex appeal.

The board on top is a Jacobs 422 competition noserider - the original board for the C Street contest of 1965. The board on the bottom is a Hobie competition surfboard with a concave shaped by Phil Edwards.

Don said he wasn't finished and we'll soon be going back up to Ventura to add more surfboards to his mini-museum. The Hawaiian Gun Rack surfboard racks are American designed craftsman wall racks that take your storage problem and truly turn them into works of art.